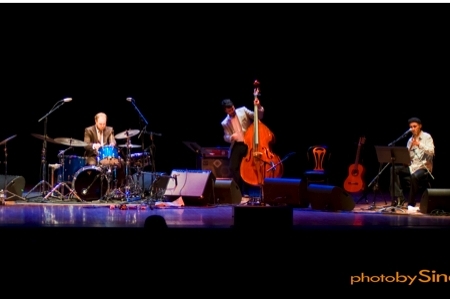 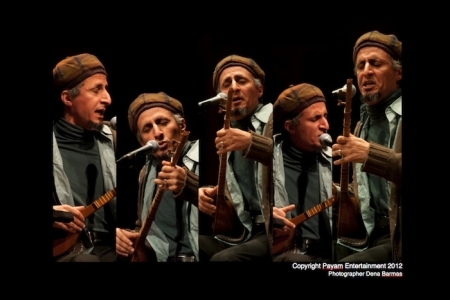 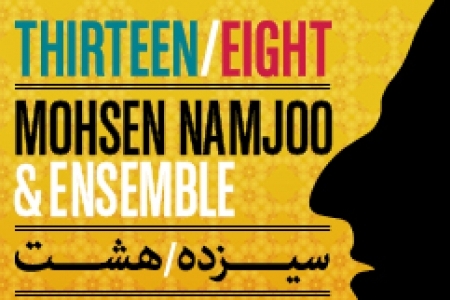 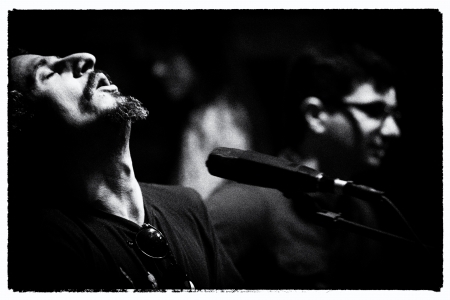 Sisterly Love Hits the Sunset Strip with the Exuberant Abjeez

On December 11th 2010 a sisterly duo by the name of Abjeez, an Iranian world-pop band from Sweden, came to the famed Roxy on the Sunset strip performing for the first time in Los Angeles. They started off with the song “Congo Man Crew,” an ode to Iran’s Green movement, setting a witty, socially informed yet tender tone for the night. The stage glistened under green lights as sisters Safoura and Melody Safavi passionately sang: “be jame ashegha be peyvand o bebin chi mishe,”which translates to “join the band of lovers, and see what will come from it;” it seemed as if the band was now inviting the listener simultaneously to the Green Movement and something much more personal. What continues to set Abjeez apart from other new-wave Iranian bands is their authentic and unapologetic voice, both lyrically and musically. Their wit is undeniable. The second song “Vaghti ke Bozorg Shodam”or “When I Grow Up” was testament to this. An anthem for all lost souls with identity crisis, it has an infectious groove while the sisters sang of becoming a doctor, gymnast, ballerina, engineer, cartoonist, philosopher, bassist, reporter, yogi, perfect housewife, et al. It was only two songs into the show and the audience had already become “one of them;” this was in no small part due to the stage presence of the band’s singers, acting out every subtlety in the lyrics.

Various musical influences such as rock, pop, salsa, merengue, ska, house, reggae, and flamenco were heard but the highlight of the iterations was with the 6/8 wink, when suddenly from a pulsating club rhythm the band smoothly transitioned, if only for a few measures, into the familiar Iranian dance rhythm--maybe it was a special delivery for the so-called Tehrangeles crowd. Another colorful moment was when band member Nicolas Zubieta aka Navid, percussionist and keyboard player of the band, took the microphone and broke out a reggaeton incantation. The different layers and acts added a much needed exuberance that is usually missing in Iranian acts. Other Iranian groups, for example Kiosk whose singer/lyricist Arash Sobhani has undeniably creative lyrics, lacks the stage presence or nuance needed for a live show to sustain itself without the audience having a few drinks.

The songs, whether intent on reminding us to not judge others, having pretentions, or remembering those struggling for freedom in Iran, somehow managed to remain anodyne, still ignite passion, and in no way sound patronizing. In the song “Bezaar,” Safoura reminded the audience that freedom must begin from freeing our minds in order for freedom in society to follow. The song, a mellifluous but sad reminder of the malaise of Iranian culture, ends with the chorus “let me be, set me free.” Their well-known song “Khastegari” or “Arranged Marriage,” is a social-critique of traditional Iranian culture; a song that pokes fun at parents shopping around for the ideal life partner for their children. The Abjeez sarcastically point out the popular notion that if the marriage doesn’t work out, a newborn can bring about wedded bliss. Their song “Geryey Mard,” while dripping in irony skillfully plays with restrictive expectations of masculinity while singing, “mard ke gerye nemikoneh”or “men don’t cry.” Safoura played on this theme by asking the male audience members to sing the chorus “men don’t cry,” and then switching to the women she asked “now with a softer voice, or wait maybe a woman’s voice isn’t always soft, who knows!?” Throughout the show, in excitement, audience members would shout in unison: “Melody, Melody, Melody, Safoura, Safoura, Safoura.”

Another appealing aspect of the band is that despite its Persian as well as culturally Iranian lyrics--the majority eloquently written by Melody--non-Iranians are often able to connect with their music because of its international and popular flair. And their flair is no small part due to their hybridization of different Western musical genres with predominantly Persian lyrics. “Tu me Haces Falta” was a pleasantry of Spanish and Persian lyrics; however, the few songs that they performed in English were only nice, and lacked the familiarity or comical punch of the songs sung in Persian. Another reason for this was the diction while singing in English. While it was unclear how many non-Iranians were in attendance, one thing was certain, namely that whether Iranian or not, everyone seemed relieved that the Abjeez had finally decided to perform in Los Angeles.

It should also be mentioned that the Abjeez are backed by the talented musicians Johan (Javan) Moberg on guitar, Erland (Ardalan) Hoffgard on bass, Robin (Ramin) Cochrane on Drums, and Paulo (Pahlevan) Murga on percussions and keyboard. And not to be forgotten is the silent member, and older brother to the sisters, Sufi Safavi, who is the sound engineer for the band. The Abjeez US tour will continue in New York on December 14th, Washington DC on the 16th, and Atlanta on the 18th.  Be sure to support them and welcome them in your town. You certainly won’t be left with concert-goers remorse.

Q&A With Pop Singer Cameron Rafati: iPhones, Hanson, and Being Half Persian

When we are asleep