Holiwater is a multimedia performance of video and live music that documents the decline of water at the Ganges River of India as seen through the lives of two Indian musicians over the course of ten years. The Holiwater Project is inspired by direct experience of the sacred Ganges river of India – its rhythms, its beauty, its people, its meaning for humanity and, sadly, its rapid deterioration in the face of neglect and misunderstanding. 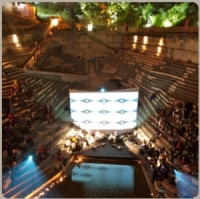 The Holiwater Project is a multimedia performace created by a collective group of artists from the UK, India and New Zealand as a response to the music of Deb Das & Kannai Baul, the principle characters the documentary film Holiwater is based on. The performances aim at bringing an experience of the river to audiences. The intention is to inform, entertain and inspire positive action around issues relating to water, with a deliberate focus on the water crisis of the Ganges. The music and film work is staged in hybrid environments and performed by artists  Tom Bailey, Vikash & Prabash Maharaj and James Pinker along with the music of the Bauls. The show is a public installation work conceived and directed by photographer & video artist Andrei Jewell. The Los Angeles performance is presented by SoCiArts Productions.

HOLIWATER  is sponsored by Creative Visions Foundation, a publicly supported 501 (c)(3), which supports Creative Activists who use the power of media and the arts to affect positive change in the world. All donations are tax deductible.

Please visit the page and support this project.

“Exercise with confidence and humility in your role as an Earth citizen. That you are a citizen of the Earth and that whatever you do does make a difference.”  Vandana Shiva, Physicist & Environmentalist


In the last 9 years The Holiwater Project band has performed eleven criticically acclaimed shows to thousands of people . These events when covered by mass media  have further exposed the work to many more people, often numbering in their millions through print and broadcasts by  major national news networks in India and New Zealand. The project has performed in settings from gothic cathedrals, wooded glades, desert palace reservoirs and on the banks for the Ganges itself. The installation-live show continues to be a captivating experience with a global message from the heart as it evolves through the film work.

“The cinematic ambience encourages the listener into a world which is unhurried, meditative, yet pin point present”¦a show based on intense concentration, skill, and almost telepathic communication between the performing artists” – Metro Magazine

END_OF_DOCUMENT_TOKEN_TO_BE_REPLACED

On March 8th, the 100th Anniversary of International Women’s Day, celebrations are taking place worldwide to highlight both the progress made for women’s rights and the distance we have yet to go. We must also not forget another day that will take place later this month honoring an issue of grave importance to women. March 22 is World Water Day.

Links for your information on animal and water rights

Many of our readers are always seeking new websites to get new, progressive and creative information on the issues they care about. SOCIARTS has been working on two art-campaigns that each focus on a vital issue contemporary societies face today.

Fiji Water, one of the world's most well-promoted brands of bottled water, is also one of the most secretive and private.

A Long Time Coming: The Human Right to Water

I've often daydreamed about what an alien civilization would think about Earth if they were ever to come visit, given our fractured ethnic, political, and economic planet, the epidemic violence, our ecological ignorance and mismanagement, the miserable way so many people live in poverty and misery, and our global failure to eradicate basic diseases such as cholera that simply require safe water

A large screen film installed with a reflection pool. A 'khund' is a traditional Indian water tank for the communal and ritualistic collection of water.
This installation, film and performance was created by Andrei Jewell with members of The Holiwater Project and curated by Rhana Devenport, The Govett Brewster Gallery, New Plymouth, New Zealand.

Two Indian mystics set off on a musical journey up the Ganges River in search for an estranged son, only to find that their spiritual mother, the fabled river, is dying.