At Retrospectives we acknowledge the work of those artists who have dedicated their career to elevating the human consciousness through their art. 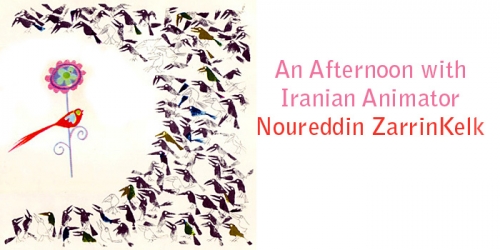 Admission is free. Reception to follow, sponsored by Farhang Foundation.

Make Reservations for the event

Note that due to technical issues the event at UCI has been canceled.

END_OF_DOCUMENT_TOKEN_TO_BE_REPLACED

The Republic of the Imagination: An Evening with Azar Nafisi A Visions and Voices Signature Event

Synopsis:
Ambassadors of different countries at the United Nations deliver amazing speeches about love, peace and solidarity, however …
This short move is a manifestation and condemnation against the present “United Nation”.
It has nothing to do with the statements and slogans by mad dictators and has not ever been supported
by any governmental organizations.

CANCELED :An Evening with Iranian Animator Noureddin ZarrinKelk at UCI

Please note that this event has been canceled due to technical issues. Please try to attend the USC event on September 25th. Info at: http://cinema.usc.edu/events/event.cfm?id=11994

An Afternoon with the Legendary Iranian Animator Noureddin ZarrinKelk

We at SOCIARTS are delighted to co-sponsor a very special retrospective screening and conversation with one of Iran's most recognized animators, concept artists, graphic designers, illustrator's and storytellers Noureddin ZarrinKelk.

The USC School of Cinematic Arts invites you to participate in a retrospective screening and conversation with Noureddin ZarrinKelk, widely regarded as the father of Iranian animation.