Leaving Behind the Lounge

Anyone who is as intimately familiar with Thievery Corporation’s music the way many of their most loyal fans are may think they know what to expect with their new album Culture of Fear. And in the most general sense, they’d be right: soul, funk, downtempo hip-hop, beats from Latin America, the Middle East and around the world swirled round into a dubbed-out pastiche.

The cross that’s always been borne by the DC duo, however, has been the propensity for people to completely miss what they’re all about. Namely why these global sounds are meshed so well, and the message that holds it all down. Much of it’s not their fault; something about the “lounge” aesthetic necessarily brings up images of plush sofas and cosmopolitans, far-removed from the grassroots. Indeed, it’s happened to many other of the best acts in the broad tent of electronica. 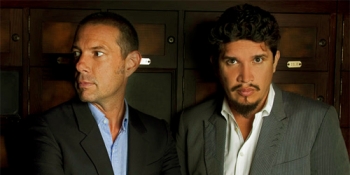 The irony of this is that few groups of any style actually integrate message and sound so well to begin with. And in the case of Thievery Corporation, for as stylish as they make it, their radicalism has only become more pronounced over time. One would think that naming your album The Richest Man In Babylon and slapping pictures of Subcomandante Marcos on your cover would get the point across, but then one should never underestimate how thick today’s most embedded music critics can be. In their minds, protest can’t be cool, the resistance can’t be organic, and the revolution will always be little more than a pipe dream.

Perhaps for this reason, Thievery Corporation have made their latest statement, Culture of Fear, rather unmistakable. It literally stares you down from the cover, a CCTV camera watching your every move. There is a lot to talk about on this album, not all of it good. One gets the sense that when all is said and done, this may be Thievery’s most timely album, albeit not their best, and for that reason may ultimately and tragically end up buried.

“Seems to me like they want us to be afraid. Maybe we just like being afraid, maybe we’re just so used to it at this point that it’s just a part of us, part of our culture.” These opening words from the title track are recited by Boston’s Mr. Lif, a voice notable in hip-hop (even underground hip-hop) for his refusal for buy into the hype of Obama-time. The song itself, much like the rest of the album, is harder than we might be used to from Thievery: relatively sparse, heavier on the bass than the horns or keyboards or anything else for that matter, with the exception of Lif’s rhymes:

“We fear the IRS, fear the INS, fear God
I’m more afraid of the credit cards and the terror squad
‘Cuz really y’all, they steppin’ with weapons overseas
MasterCard and Visa won’t allow me to breathe...”

As I said, blunt. Rob Garza and Eric Hilton have always had a great ability meshing their guest stars’ contributions with their own sounds, but there’s a difference between, say, hiring out Wayne Coyne to sing about “hate machines” and other metaphors and, well, this. In fact, one notable difference between Culture of Fear and 2008’s Radio Retaliation is the almost complete lack of big-name collabs.

To be sure, much of the album is very much stock Thievery. Rich, ethereal soundscapes like “Light Flares,” “Take My Soul” or any of the other tracks featuring longtime collaborators Lou Lou or Sleepy Wonder are all perfectly lovely-yet-intelligent chill-out tracks that never seem to drift into the cliches of Ibiza.

Per the norm, however, we are never allowed to get to comfortable. In fact, for all the hip coolness that drips from these tracks, there’s an equally unavoidable feeling of paranoia. Even within this safer side of the album, say on tracks like “Stargazer,” there is frequent mention of being watched.

This feeling gains real steam during “Tower Seven,” a purely instrumental joint that inspires unease based on its title alone. By the time we arrive at “Is It Over?”, a sprawling, echoing ball of dissonance, we’ve left the comforts of the lounge behind. Instead, we’re thrust into Ras Puma’s vague millennial warnings to “keep our vision clear” on “False Flag Dub.” Where Thievery Corporation’s last three albums (in order, The Richest Man In Babylon, The Cosmic Game and Radio Retaliation) relied largely on the guest vocalists to declare a message, here it’s left up to the music itself.

This straightforward simplicity, though arguably Culture of Fear’s biggest strength, is also its biggest stumbling block. One often gets the feeling from past albums that you’re listening to an illegal communique, a feeling heightened by the myriad guests that popped up throughout--Femi Kuti here, Seu Jorge there, even David Byrne making the odd appearance. Here, though, it feels much more a retrenchment, a subtle digging of the heels. It’s an unsettling experience for this listener.

Maybe it’s just the difference in time. Thievery Corporation broke out right around the time that their own neighborhood, Washington, DC’s 18th Street, had officially been taken off the “in transition” list and had been overrun by the very people the area’s artists had sought to escape.

It made for a lot of contradictions. Musicians and DJs who had long hovered beneath the surface suddenly gained the success they had always deserved, in part because of a fan-base where the nouveau riche were painfully present. All of a sudden, the same set who would spit on Garza and Hilton if their opinions were expressed in any other milieu could now call Thievery Corporation “the coolest band with the lamest politics” (I was actually told this once, and yes, he had a popped-collar and went to Georgetown).

Now, much of this illusion has been popped, along with much of the rest of the American Dream. The 18th Street corridor is still largely yuppified; the difference now is that, like the counterparts in other cities, it can no longer pretense of being anything but. Revolutions are a real thing, as is American class struggle. It’s hard to imagine a lot of Thievery’s more well-to-do fans sticking around; not now, when their art so closely mirrors the real world.

Moreover, the heavy-handed security state can no longer be simply called a Bush phenomenon. In the age of WikiLeaks and Bradley Manning, when extraordinary rendition and drone attacks have been proven to be thoroughly bipartisan, Thievery Corporation perhaps don’t have to try as hard as they once did.

They don’t have to go out of their way to play Operation Ceasefire to “prove themselves” as activists, or do promotions reminding people that hunger is a real issue. Those who can’t see either of these things can most likely afford to be blind in the first place.

In a time when the stakes have never been higher, when hope and paranoia are such an inescapable part of everyday life, not “getting” what Hilton and Garza are driving at most likely means you were never their target audience to begin with. Maybe what Culture of Fear reveals is that, after ten years of Bush-era stagnation holding them back, Thievery Corporation are finally going through growing pains.

Alexander Billet, a music journalist and activist living in Chicago, runs the website Rebel Frequencies (http://rebelfrequencies.blogspot.com) and is a columnist for SOCIARTS. He has also appeared in SocialistWorker.org, Z Magazine, New Politics and TheNation.com. He can be reached at rebelfrequencies@gmail.com.