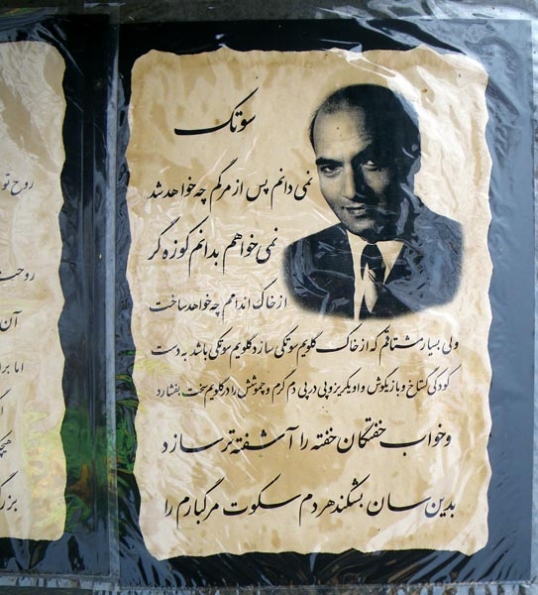 "I don’t know what will happen after my death...

But I am very anxious that the potter makes a sotak (whistle) out of my throat’s soil.

Then a playful child can blow strongly into my throat – continuously -

So that it disturbs the sleep of those lethargic people

And each moment breaks the silence of my death."

Dr Ali Shariati (Farsi: علی شريعتی) (November 23, 1933 in Kahak - 1977 in Southampton, England) was an Iranian revolutionary and sociologist, who focused on the sociology of religion. He is held as one of the most influential Iranian intellectuals of the 20th century and has been called the 'ideologue of the Iranian Revolution'.

Ali Shariati was born in 1933 in Kahak (a village in Mazinan), a suburb of Sabzevar, found in northeastern Iran. His father, Mohammad-Taqi, was a teacher and Islamic scholar, who opened in 1947 the 'Centre for the Propagation of Islamic Truths' in Mashhad, in the province of Khorasan, a social Islamic forum which became embroiled in the oil nationalisation movement of the 1950s.

In his years at the Teacher's Training College in Mashhad, Shariati came into contact with young people who were from the less privileged economic classes of the society, and for the first time saw the poverty and hardship that existed in Iran during that period. At the same time he was exposed to many aspects of Western philosophical and political thought. He attempted to explain and provide solutions for the problems faced by Muslim societies through traditional Islamic principles interwoven with and understood from the point of view of modern sociology and philosophy. His articles from this period for the Mashhad daily newspaper, Khorasan, display his developing eclecticism and acquaintance with the ideas of modern Islamic and extra-Islamic thinkers such as Jamal al-Din al-Afghani, Muhammad Iqbal, Sigmund Freud and Alexis Carrel.

In 1952 he became a high-school teacher and founded the Islamic Students' Association, which led to his arrest after a demonstration. In 1953, the year of Mossadeq's overthrow, he became a member of the National Resistance Movement. He received his bachelor's degree from the University of Mashhad in 1955. In 1957 he was arrested again by the police, along with 16 other members of the National Resistance Movement.

Ali Shariati then managed to obtain a scholarship for France, where he continued his graduate studies at the Sorbonne University. There he was considered a brilliant student and elected best student in letters in 1958. He worked towards earning his doctorate in sociology, leaving Paris before he was able to complete his studies in 1964. During this period in Paris, Shariati started collaborating with the Algerian National Liberation Front (FLN) in 1959. The next year, he began to read Frantz Fanon and translated an anthology of his work into Persian. Shariati would introduce Fanon's thought into Iranian revolutionary émigrée circles. He was arrested in Paris during a demonstration in honour of Patrice Lumumba, on January 17, 1961. The same year he joined Ebrahim Yazdi, Mostafa Chamran and Sadegh Qotbzadeh in founding the Freedom Movement of Iran abroad. In 1962 he continued studying sociology and history of religions, and followed the courses of Islamic scholar Louis Massignon, Jacques Berque and the sociologist Georges Gurvitch. He also came to know the philosopher Jean-Paul Sartre that same year, and published in Iran Jalal Al-e Ahmad's book Gharbzadegi (or Occidentosis) .

He then returned to Iran in 1964 where he was arrested and imprisoned for engaging in subversive political activities while in France. He was released after a few weeks, at which point he began teaching at the University of Mashhad.

Dr Shariati then went to Tehran where he began lecturing at the Hosseiniye Ershad Institute. These lectures proved to be hugely popular among his students and were spread by word of mouth throughout all economic sectors of the society, including the middle and upper classes where interest in Shariati's teachings began to grow immensely. Shariati's continued success again aroused the interest of the government, which arrested him, as well as many of his students. Widespread pressure from the populace and an international outcry eventually led to his release after eighteen months in solitary confinement, and he was released on March 20, 1975. Shariati was allowed to leave the country for England. He died three weeks later in a Southampton hospital. Shariati's death is the subject of some controversy. While the official autopsy indicated a heart attack as the cause of death, there is a degree of consensus that he was assassinated. However, the identification of the assassin varies. SAVAK, the Shah's secret police, is frequently mentioned as the likely suspect. However, some counter that Islamist hard-liners are to blame, on the basis of similar treatment of Ahmad Kasravi. Shariati's shrine is in Damascus, Syria in the yard of his beloved Zainab bint Ali.