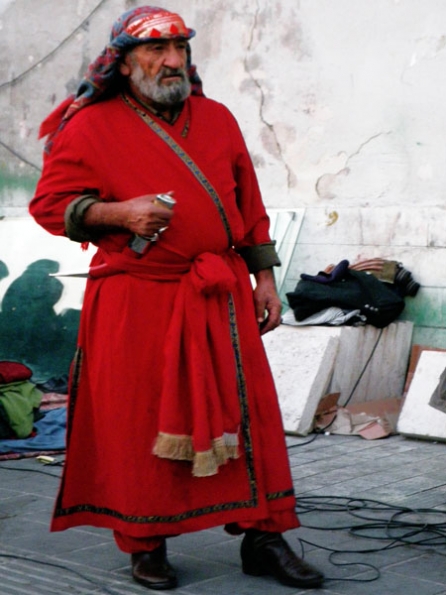 The Ta’ziyé is the only traditional drama produced by the Islamic world. It is essentially a ritual theatre – a real mourning service – and its form and content have their roots in the religious tradition.
A religious play with a tradition linked to the tragic events of the history of Islamism, that puts on the stage the imam Hossein’s martyrdom (grandson of the prophet Mohammed, Ali’s son and second imam of the Scythian), happened in the 7th century A.D. Even if it is Islamic, it is deeply Persian and takes inspiration from that political and cultural heritage.
Hossein’s murder and the massacre of Kerbala were the epilogue of a conflict which broke out, soon after Mohammed’s death, to get control over the rising Moslem community and marked the final division of the Muslims in Sunnite and Scythian.
The former embraced the ancient Arabian tradition of succession by election, the latter wanted the succession was hereditary on the ground of blood-ties with the Prophet.Since the 10th century, when in Iran and in Baghdad the Scythian Muslims seized the power, the mourning groups of the imam Hossein began their activity in memory of the martyrdom. Since the Safavì age, (15th century) this peculiar kind of staging found inspiration in the epic tales by Siyavash of the ancient Iran.
At the beginning of shah Nasserddin’s dynasty in 1906, more than thirty “tekkiyè” were built, these are the places for the Ta’ziè representations. Shah Nasserddin conceived a scene suitable for the theatrical representations and built a place similar to the Albert Hall in London. But as the religious men opposed that plan, he dedicated the place to the Ta’ziè representations. The “state tekkiyè” that many foreigners compared to the arena of Verona, was a three floor round building, 24 metres high with a 60 metres long radius. The actors played the Ta’ziè on a board. The show had no scenery, it was entirely narrative and the performance was enriched by songs and poems. Since that time the group that represents the imam’s family, or the pure souls, wears green dresses, while the generals and Yazìd’s army (Yazìd is the emperor on Islam’s country) wear red dresses, with the aim to help the audience to identify the roles.
Red is the symbol of blood and sin, while green is sign of pureness and innocence. Moreover the actors’ dresses are not those of the 6th century, but they belong to the Ghajar age (end of 19th century and beginning of 20th century) when the Ta’ziè stories turned into a written plot.
The Olià ( i. e. the members of imam Hossein’s family) sing following the Iranian musical tradition, while the soldiers of Yazìd, Shemr and Ebne Saad don’t sing but express themselves using melodic prose.