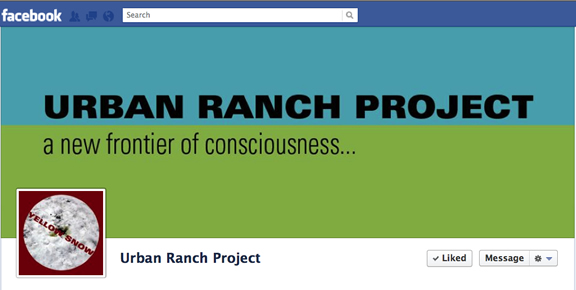 URBAN RANCH PROJECT:
a new arts initiative that uses the power of social media to inspire change...
by Alysse Stepanian

On March 24, 2012, I launched the URBAN RANCH PROJECT (URP) on Facebook in conjunction with the completion of a paper, "Don’t Eat The Yellow Snow," which serves as a document describing URP's mission. This FB page features work in all media, with the exception of those that exploit and abuse animals (humans and non-humans!). URP's mission is to bring awareness to the interconnectedness of racism, sexism, ageism, speciesism, and other social and hierarchical prejudices. Using the power of social media, URP strives to inspire change.

Work presented on URP's Facebook page is posted on a daily basis. To date the featured works include: Philip Mantione's "Social Immune System," a 16 Channel sound piece that was created using the field recordings he made at the Occupy LA demonstrations; "The California Poppy Collective" environmental activist work by Christy Roberts; videos by Swedish Eva Olsson, depicting the alienation of 21st Century humans and obsession with possessions, including the right to ownership of other animals; "One Day on Mars" video by German artist and curator, Wilfried Agricola de Cologne, a penetrating statement about hierarchical power abuse of humans against humans and against other animals; wall reliefs by US artist, Margaret Roleke, making statements against war; work by the US artist Lynne Hull who has "pioneered in 'trans-species' art, creating sculpture installations as wildlife habitat enhancement, eco-atonement for human impact" and videos by Kasumi (US) "with poignant cultural-political meaning."

Beginning on April 12, work by the Chinese artist duo, Gao Brothers, will be featured for several days and will include their current project, "Borrowing the Statue of Liberty for Exhibition in Beijing." We will hear from the brothers the story behind the beginning of their "hug" or "Embrace" performances and images. In an email to me, Gao Qiang states: "I have been a vegetarian for over 20 years now, I think human beings should keep a distance from other animals..."

Visit https://www.facebook.com/UrbanRanchProject and click "like" to show your support for the URBAN RANCH PROJECT. This FB page can also be reached at http://urbanranchproject.com/

The complete article, "Don’t Eat The Yellow Snow" can be downloaded here: http://manipulatedimage.com/Dont_Eat_The_Yellow_Snow.pdf

"ART IS ART AND SO IS EVERYTHING ELSE - THERE IS NO DISTANCE BETWEEN ART AND LIFE." ~ Stepanian