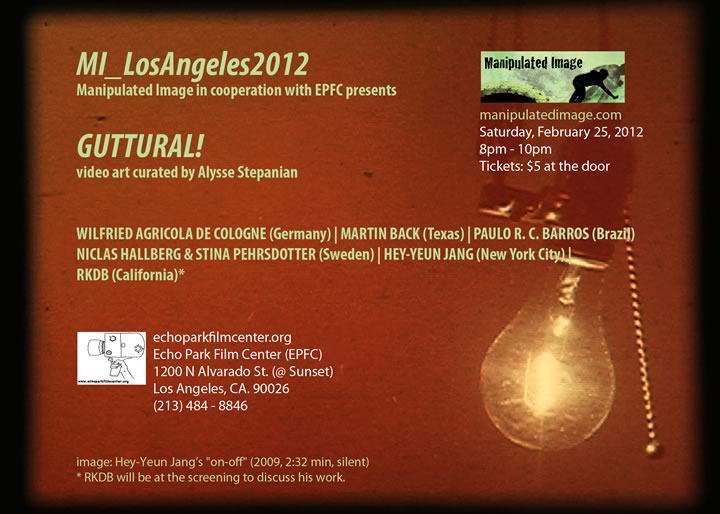 (merriam-webster.com: Guttural... marked by utterance that is strange, unpleasant, or disagreeable)

There is an unbridled energy and natural rawness to Martin Back's video, in which he uses his mouth, a contact mic and a webcam to create a raucous performance. Paulo Barros's percolating geometric abstractions are inhibited only by their forced rectangular enclosures. Hey-Yeun Jang's work penetrates the “in-between,” the deep cracks that are left unexplored in familiar realities. Niclas Hallberg and his collaborator Stina Pehrsdotter give voice to those who have come to feel shame in a civilization that has alphabetized and codified proper conduct. Wilfried Agricola de Cologne's videos are both visually and viscerally penetrating, and his clear observations are potent and commanding.

In addition to the above selections from MI's archives, RKDB, a video artist based in Oakland, California will be at the screening for the presentation and discussion of his work. A BFA graduate of Carnegie-Mellon University, RKDB worked off-Broadway and in independent films in New York City, and while working at MoMA as an assistant to the curators for the Jackson Pollock retrospective, he had a revelation that led him to video art. RKDB calls himself an "amateur anthropologist/comparative religion and Jungian student." To the first time viewer, his work may appear absurd, funny, and even irreverent. But after viewing a collection of his work, one will come to understand the degree to which he is obsessed with Jung, ritual, myth and shamanism. RKDB trusts in intuition and the transformative power of inner truths, and sincerely believes that "the dreamlike quality of the moving image is best suited to respond to and enter into a dialogue with the part of the mind that is beyond - and on which floats - the rational sphere."

It is not necessarily the "strange" quality of the sound that makes some of these works guttural, but the restless audacity of the artists in breaching the boundaries of the agreeable, the proper, and the familiar.

The screening will include selections from MI's video archives and a body of work by RKDB, an Oakland-based artist who will be present for a discussion.