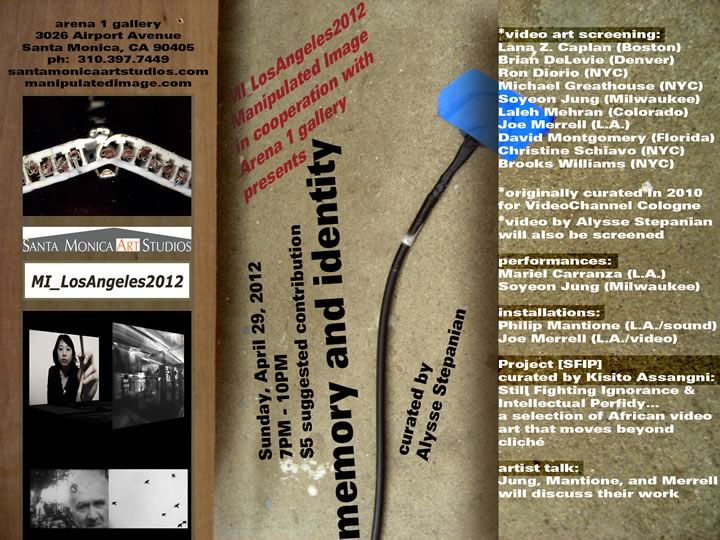 Tonight's screening includes a compilation of videos by ten U.S. artists. These works are as diverse as the memories and identities that fabricate the singularity of the concept of unity and nationhood of this country. Most of these videos were originally created for installations and share a monumental quality, as if to reflect the enduring attributes of the memories that make up one's identity. Soyeon Jung, a Korean born American, draws a literal parallel between food consumption and the internalizing of her own experiences of moving between the two cultures. Lana Z. Caplan comments on human survival amidst loss and destruction. Brian DeLevie and Isshaela Ingham reflect upon childhood memories from the safe distance of a far away future. Chris Schiavo's heroine's active search for a unique sense of self contrasts with Brooks Williams and Ron Diorio's central figures, who seem to have lost their internal battle. On the verge of making compromises, they struggle to negotiate their conflicting needs for individuality and belonging, as their socially driven desires dictate their beings. Iranian born Laleh Mehran combines “religion, science, and politics,” in complex works that find commonalities in territories that have claimed marked distinction through the filters of history. In a video by Michael Greathouse a detached human head floats in the sea, its movement decipherable as it passes the only marker in the landscape, a lighthouse that may represent a flash of a memory that marks a person's individuality. Joe Merrelldepicts drivers on a Los Angeles highway, alienated in their automobiles. They eventually vanish into a single point, perhaps symbolic of their myopic outlook toward life. And finally, David Montgomery depicts "a collective memory of growth," allowing the combined synergy of technology and nature to break into a time lapse dance to music by the band, Sleeping People.

Tonight's event will feature performances by Soyeon Jung (Wisconsin) and Mariel Carranza (L.A.) created for this occasion. Jung, whose video is also part of the screening, will be sharing food with the audience at a traditional Korean style dinner table, as a way of recalling her childhood memories. Mariel will contemplate the idea of the "self" as she gazes into her reflections in the surrounding glass and mirrors. Los Angeles artist Joe Merrell (L.A.) will present a video installation on a monitor, with processed images shot during a walk in the park. Philip Mantione's (L.A.) 6 channel sound installation in one of the rooms of the gallery assimilates each unique sound created by the movement of individuals into a mass of what he describes as "consensual identity."

Also in the gallery, a monitor installation will present the [SFIP] Project - Still Fighting Ignorance & Intellectual Perfidy curated by the artist, Kisito Assangni. Kisito writes, "From experimental video to short film, this show focuses on aesthetic and methodological perspectives of fighting ignorance and intellectual perfidy in contemporary African art. The project tells Africa's story by African new media artists as seen through the lens of the relation between tradition and modernity." ( http://sfip-project.blogspot.com )

A video by Stepanian is included in tonight’s screening