Women are treated as second-class citizens. They're objectified, exploited and condescended to on a daily basis. When they, god forbid, raise their voice against this kind of treatment, they're hounded for speaking out of place. It might sound like more of a description of 1950s America than the modern music biz, but the recent controversy around Rihanna shows how little difference there is between the two.

Rihanna is, of course, the best-known young victim of domestic violence in music today. Her abuse at the hands of Chris Brown a couple of years back has undoubtedly shaped her art; last year it was "Love the Way You Lie," her collaboration with Eminem, that sparked the ire of certain "family groups" for its graphic portrayal of domestic violence. Now, it's her new video for "Man Down." 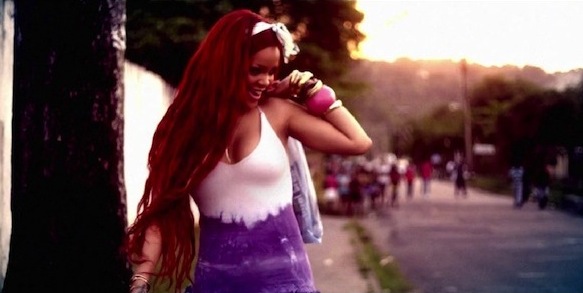 The subject matter of the vid is unmistakable: in a crowded train station, Rihanna takes aim at an anonymous man, then pulls the trigger; he falls in a pool of his own blood. Then, flashing back to the previous day as the song starts, we see a much happier Rihanna hanging out with friends and going clubbing. At the club she's approached by the same man she shot. After his advances are turned down, he accosts her outside violently. At the end of the video we see him walking away, his shirt torn, while Rihanna collapses in a corner. The implication is that he sexually assaulted her. Still, the lyrics of the song have the singer clearly expressing regret over taking his life.

The day "Man Down" premiered on BET, Rihanna expressed on her Twitter account that it would have a "very strong underlying message 4 girls like me." Ironically, that underlying message has been amplified and made all the more urgent by the ensuing uproar.

Pastor Delman Coates, a founder of the Enough Is Enough Campaign declared the video "a clear violation of BET’s own programming guidelines shared with the public by Debra Lee, the chairman and CEO of BET Networks." Coates went on to join with the Parents Television Council and the Industry Ears advocacy group in calling for Viacom, BET's parent company to immediately pull the video.

Paul Porter, a former music programmer for BET and founder of Industry Ears, went even further: "['Man Down' is] an inexcusable, shock-only, shoot-and-kill theme song. In my 30 years of viewing BET, I have never witnessed such a cold, calculated execution of murder in primetime. Viacom’s standards and practices department has reached another new low.”

It's amazing that this is the video singled out, especially given the recent ways in which sexual violence has been in the news lately. That Porter is upset over the shooting (not all that unique for primetime TV) without saying a word about the allusions to rape shows where his priorities lie. Really, there's very little separating his world from the crude, old-school PMRC witch-hunts of the 1980s.

Back then, the targets of Tipper Gore and company were often selected at random; rap acts would be singled out for violence while much worse depictions in "white" music were let off the hook. It belied the agenda of "protecting children" for one much more colored by racism and Reaganite elitism. Now, it's the sexism of the establishment on display.

That sexism is palpable. In several US states, legislatures are considering laws that not only strip women of their right to choose, but seek to narrow the definition of rape itself. Powerful men like Dominique Strauss-Khan feel they can sexually assault hotel cleaning-women without consequence, and really it's no wonder why. About the same time that Strauss-Khan was finally getting busted, a New York City police officer was being acquitted of raping a woman he drove home. Two cops in Chicago have recently been implicated in a similar case. In both instances, the first question asked by reporters and prosecutors was how much the women had been drinking.

The Parents Television Council hasn't been oblivious to the pop culture reflections of this sexism. They also, however, show a rather sensationalistic disregard for moral context. On more subtle depictions of sexism, groups like the PTC have remained notably silent. Their prudish attitude toward violence--which can be summed up as "airbrush it and it'll go away"--simply turns viewers young and old into unintelligent babies.

The same is being done to Rihanna right now. When she was beaten by Brown, she inspired sympathy from most political stripes. When she used her music to bring attention to the realities of domestic violence, she was laughably accused of condoning it. And finally, now that she's portraying the realities of sexual violence and revenge (albeit in a rather simplistic, Hollywood kind of way), she's flat-out denounced.

Rihanna is herself a bundle of contradictions; over the past several years her own music and videos have frequently been the kind of stereotypical schlock demanded by the music industry from female pop artists. Few artists of her stature, however, have been willing to speak up about the realities of sexist violence and its consequences.

What the PTC and its ilk don't get is that there is a difference, to put it bluntly, between the violence of the oppressor and that of the oppressed. In a world where women are blamed for being victimized, where rapists get off scot-free and are often even protected by the legal system, are we really that surprised when a woman takes the law into her own hands?

It's a question that is resonating loud and clear right now. Back in January, Toronto Police Constable Michael Sanguinetti had the gall to tell a York University safety forum that "women should avoid dressing like sluts in order not to be victimized." Since then, the SlutWalk marches have spread to Boston, London, Sydney, Stockholm. No surprise that the sexist victim-blaming goes well beyond North America, nor does the outrage.

On June 4th, I attended the Chicago SlutWalk. What I saw was stunning: the crowd was multiracial, overwhelmingly young women, obviously sick of being objectified and blamed for it. A number of them carried signs that reflected their survival of sexual violence; others had scrawled the word "survivor" across their chests in magic marker. One of the refrains throughout the day was "wherever we go, however we dress, no means no, yes means yes!"

The message was clear: if the system won't defend us, then we'll fight back. Now that women in the music industry are saying the same thing, the "tsk-tsk" of the censors is louder than ever. Coates, Porter, the PTC and the rest have merely turned themselves the musical analog of the victim-blaming cops and judges. In the end, they all serve the same repressive function.

Alexander Billet, a music journalist and activist living in Chicago, runs the website Rebel Frequencies (http://rebelfrequencies.blogspot.com). He is a columnist for SOCIARTS, and has contributed to TheNation.com, Z Magazine, SocialistWorker.org, CounterPunch and PopMatters.com. He can be reached at rebelfrequencies@gmail.com.