When it was first released thirty years ago, the Clash’s Sandinista! blew minds in all directions. It was called “groundbreaking” and “unwieldy,” “revolutionary” and back to “self-indulgent.” Journalists in the mainstream had no clue how to peg the radical, genre-bending behemoth. Punk purists simply labeled it a betrayal.

Three decades later the triple album still confounds the music establishment. Case in point: Sony has quietly coughed up a thirtieth-anniversary edition of Sandinista! with barely a peep in the way of publicity and no plans whatsoever to release it Stateside. 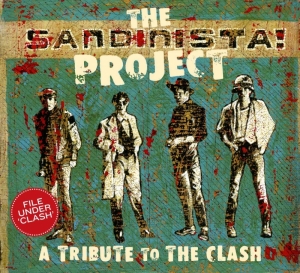 Critically it remains divisive; popular consensus seems to dictate that somewhere in the two-and-a-half hour sprawl, there’s a coherent album; if only Strummer, Jones and company had bothered to trim the fat. Good thing they didn’t; if they had, we might have lost any number of threads in today’s best music.

Like most of the planet, the Clash were at something of a crossroads in 1980. They had taken a risk recording London Calling, and the risk had paid off. Having already broadened their musical palette into the reaches of jazz, rockabilly and Wall of Sound on a double LP. Calls of sell-out had already been leveled against the group, but as bassist Paul Simonon said in ‘81, “Punk was about change and rule number one was: there are no rules.”

The question remained, however. Where next? On that one the band waffled for some time. When they finally started the recording process for their followup, the group didn’t have a single song written! Initial recording sessions in Jamaica consisted primarily of heavy experimentation and largely went nowhere. It wasn’t until landing in New York City that what would become Sandinista! would start to take shape.

The NYC that they would cull their inspiration from was miles away from what we know today. Times Square was still dirty, the city had endured a decade of riots, blackouts and bankruptcies to now face the smug austerity of Reagan’s Cold War conservatism. It was a natural petri dish for the American punk scene.

But there was something else brewing in the five boroughs, namely drifting in from the Bronx and other communities of color. “When we came to the US, Mick [Jones] stumbled upon a music shop in Brooklyn that carried the music of Grand Master Flash and the Furious Five, the Sugar Hill Gang,” said Strummer. “These groups were radically changing music and they changed everything for us.”

The rest, as they say, is history. “Magnificent Seven” and “Lightning Strikes” were the two songs that brought the influence of hip-hop to the group’s forefront. Strummer hardly had what you could call mad skills on the mic, and it would be an insulting exaggeration to say that the Clash mainstreamed rap all on their own, but they certainly helped. At a time when the amount of actually recorded hip-hop was still quite limited, disc jockeys seized upon “Magnificent Seven,” placing it in regular rotation alongside rap’s original trailblazers.

Rap would only be one element in the mish-mash of rebel music that would comprise Sandinista! Perhaps the most challenging aspect in writing about it is doing justice to the myriad incorporation of R&B, funk, mock-gospel, calypso and just about anything that the group could get their hands on. As such, distilling the album down to one unifying theme remains more or less impossible.

If such a theme had to be chosen, though, it would simply be the continuation of the advice of their former manager Bernie Rhodes: “write what you see.” The Clash had always taken that to heart ever since they recounted the Notting Hill Carnival riots in “White Riot.” The one caveat on Sandinista! was that now Strummer, Jones, Simonon and Headon were trying to write everything they saw!

Case in point is “Magnificent Seven,” whose lyrics start by simply recounting another alienating day at work for an anonymous laborer, then drift into namedropping Marx and Engels next to Nixon and Gandhi before spinning off into a surreal pastiche of mobsters shooting lobsters and vacuum cleaners sucking up budgies. It was almost as if reality had finally caught up with the absurdism of Strummer’s cartoon interpretation of the world.

And to be sure, the election of Thatcher, followed closely on its heels by the advent of Reaganism, seemed positively ludicrous. From the opening bell, this gruesome twosome put everything that the left held dear in their sights. The Clash’s response in “The Call Up,” though couched in a slow, creeping funk, was deceptively straightforward. It was the lead single from Sandinista!, and as such was blunt: if Reagan and Thatcher’s recruiters were sent to sign you up, then, well, “it’s up to you not to heed the call up.” The draft proper had been officially discontinued in ‘73, but in 1980 Congress had re-instated the requirement for young people of voting age to register with Selective Service. “The Call Up” was a wholesale rejection of the dead-ends being offered by the establishment.

Unlike much of the group’s early work, however, Sandinista! took a bold step in actually exclaiming what the Clash stood not just against, but for. Far from being incidental, this kind of affirmation and solidarity is what drove the whole album forward. As Reagan rattled his sabre against the Nicaraguan guerrillas who had toppled a corrupt, US-backed regime a year before, accusing them of being a “second Cuba,” the Clash held them up.

“Our support for the Sandinistas was the worst thing in the world we could do according to our record label,” said Strummer. “The label heads said our music would not sell--too political--especially in America where the Reagan administration was conspiring to destroy the Sandinistas.”

“Washington Bullets” was an encapsulation of this concept. On the long, long spear of this album, “Washington Bullets” was the sharp point. Pulling together the American-sponsored coup in Chile, the Bay of Pigs, and even decrying the Soviet invasion of Afghanistan, Strummer’s lyrics seemed to build patchwork of global resistance:

“For the very first time ever,
When they had a revolution in Nicaragua,
There was no interference from America
Human rights in America...

“And if you can find a Afghan rebel
That the Moscow bullets missed
Ask him what he thinks of voting Communist
Ask the Dalai Lama in the hills of Tibet,
How many monks did the Chinese get?
In a war-torn swamp stop any mercenary,
And check the British bullets in his armory
Que?
Sandinista!”

Just as revolutionary as what the song said, however, was how it sounded. It was one of the most experimental on Sandinista! (now that’s saying something!) and the group’s signature guitar crunch was buried underneath a calypso-infused marimba beat. Keeping in mind that this was several years before the rise of “world music,” introducing these sounds to a mainstream audience was indeed a risk.

These are the moments that define what Sandinista! is all about: those countless points where the sound and politics don’t just collide, but create something greater than the sum of its parts. Be it the out-of-tune brass and bar piano of “Something About England,” the tension-filled dub of “One More Time,” the tightly wound abandon of Eddy Grant’s “Police On My Back,” or the Old World folk-tinged mania of “Lose This Skin,” Sandinista! is an album that instinctually gets the balance between the aesthetic and poetic.

So why not just have these songs on the album? Modern Clash lore tells us that upon delivering all six sides of the triple album to CBS, the record label sat on them, releasing the final product far under the radar. The opportunity was clearly there for the band to whittle it down, to cut a few tracks. Why keep songs like “Corner Soul” or “Mensforth Hill,” which consists solely of “Something About England” being played backwards? Why bother with the entire sixth side, almost entirely made up of dubs and remixes?

The answer lies in an artist’s right to not let the bastards screw them. CBS Records had toyed with this band of radicals throughout their entire time on the label, releasing singles without approval, remixing songs behind their backs, and now they were throwing every excuse at them to downplay Sandinista! Of course there were the claims that the album’s politics could get them into trouble, and the initial refusal to sell it for single-album price.

“The plan was to give people a whole heap of music and give it to them dirt cheap,” said Strummer. “We figured we’d show CBS--the mightiest record company in the world--how powerful we were. But we found we weren’t all that powerful. CBS showed us that they could put something out on their label and then just sit on it to prove a point. They didn’t just not promote it. What’s the opposite of promote? They *demoted* it.”

True to form, CBS stuck the Clash with the bill for the difference after grudgingly agreeing to sell Sandinista! at regular-album price. But in the end it wasn’t about the money or even the politics. It was about control--”Complete Control” if you will. Big labels hate it when acts try something new; the Clash had proven their own label wrong by doing just that throughout their entire career. Now they were delivering a work to their label that included child-renditions of past singles and weird tripped out waltz songs on top of large doses of dub.

If they couldn’t get away with it, then that would have been a blow to artistic freedom--the same artistic freedom that had always mirrored the steadfast rebel outlook that quite simply was the Clash at their best. What it came down to was being able to create art without rules decreed from the boardrooms and halls of power. And while this may not make these songs the Clash’s best, it certainly makes them worthwhile.

It seems that the more things change, the more they stay the same. Strummer is dead, but so is Reagan. The system that the Clash protested with almost every note they composed found its footing again as the ‘80s dragged on. The boroughs that once proved fertile ground for the rise of rebel music have been papered over as thin, Disneyland equivalents of their former selves. But it’s hard to listen to “Something About England” without picturing the unemployment lines that have returned with a vengeance. Or “Washington Bullets” without being drawn to the struggles in the Middle East and Latin America today.

Likewise, the Clash’s suspicion of flaccid, out-of-touch executives is common currency among musicians and music lovers of all stripes. On the streets, in almost every musical quarter, true credibility is bestowed not based on how many units are moved, but on whether the content is real and original. It’s a penchant that leads acts to genre-bend and experiment with sounds well outside the confines of the Euro-American sphere.

Everywhere in indie culture, artists and music exist that prove how very right the Clash were in their daring to go outside the boundaries. And if that’s true, it can only be a vindication for Sandinista!

Alexander Billet is a music journalist, activist and columnist for SoCiArts.com, and also runs the website Rebel Frequencies (http://rebelfrequencies.blogspot.com).  He can be reached at rebelfrequencies@gmail.com.