Return of the Radical Nerd 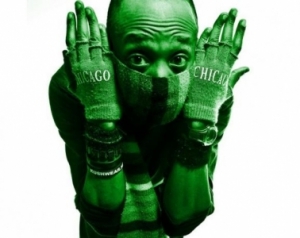 “My pockets get annoyed
I’m broke and two cents are useless when perceived like this
Honest disappointment, these people’s lives are basic,
I’m advanced nutrients about to final-phase it
You’ve been advised to get in line
I’m live and direct, plus I don’t stare at the fuckin’ floor when I’m spitting rhymes”

This is how the Chicago rapper known as Phillip Morris begins his latest album—the provocatively titled Lady Liberty Is Wasted. Indeed, the whole album is like this, providing a twisted worldview that is at once surreal and all-too-true. Gives you a sense of why he’s become one of the most unique underground hip-hop artists, doesn’t it?

At a time when most radical heads seem to be turning away from both the “mainstream” and “conscious” tropes, Phillip Mo’s songs defy any category beyond the most basic. Labels ultimately don’t interest him as much as the complexity of what he has to say. The beats on Lady Liberty are most certainly complex too, veering between re-processed funk and computerized post-hop in a matter of seconds.

His witty rhymes are delivered with a kind of maniacal humor and deadly seriousness all at once—the kind of performance that makes you think you’re listening to the freak love-child of Mr. Lif and Ol’ Dirty Bastard. As he constantly confirms, echoing his opening lines, “I am a nerd.” Conventional wisdom has it that nerds are smarter than the rest of us. Phillip would never stoop to such condescension toward his audience, but his talent for looking at how things are has made Lady Liberty an excellent listen, channeling two constant themes that none of us can deny: it’s all absurd, and it better change fast.

Of course there’s the politics. Today’s line is that a post-Obama hip-hop is really just one big house party. Whether anyone in the Chicago scene really buys this (other than, maybe, Common), Phillip certainly doesn’t—and if that cover art doesn’t tell you everything you need to know, a good hard listen will.

Almost as soon as the opening “Get My Nerd On” waves farewell we’re launched into the rousing “Please Deliver Us,” tying together his own story with those of homeless families and overthrown governments. “Requiem For a Long Winded City” is the kind of track that certainly makes Chicagoans cluck their tongues in agreement, but really will be familiar to anyone screwed over by urban corruption:

“The mayor’s lost his mind
Another year of Daley goes to show you that Chicago’s really stuck in time
The Harold Washingtons, Fred Hamptons and Rudy Lozanos
Proving Chicago’s a red canvas
I’m down for smashing the madness
Down for smashing the level of tension between Blacks and Hispanics”

(And before anyone asks, no, it won’t get better when Rahm gets in)

But focusing on this would only do half the justice to Lady Liberty. The other half is filled with scenes even more familiar—clubbing, socializing, fending off boredom, figuring out how to stop the electric from getting shut off. In an interview I did with Phil back in the fall (following the release of his The Truth Campaign mix tape), he mentioned he had been unemployed for a year. Those of us who have been there and done that will no doubt feel the hobbled swagger of “Bad News” and the frustration of “Slap You Day.”

It’s between these stories of the mundane and the epic that we get it. It’s not just a few qualms with this or that, it’s not the faces of Daley or his counterparts in other cities that we can somehow forget with a few MGDs. The alienation, the funk of daily living drips from the top into just about everything else. Perhaps it’s impossible to envision Phillip Morris without at least a bit of smirk on this album because, as said before, he sees how unbelievably absurd the whole thing is.

At the same time, Phil has never really believed that chuckles will bring down walls. The closing title-track, possibly the only on the whole album related with complete dead-faced seriousness, brings the allegory full-circle. In it, not only is the titular Lady Liberty drunk and powerless, but the real terrorists have pretty much taken over. Not only has the American dream died, it’s revived at its most nightmarish.

I sat on this album for over a month. Lady Liberty Is Wasted was released in late March. But for as much as I listened to it, for as much as I loved what the ever-observant Phillip Morris had to say, as much as I wanted to bring some attention to my city's diverse underground hip-hop scene, it was remained a hard album to peg. Where in this zeitgeist of “posts” (“post-racial,” “post-feminist,” etc) did this radical, intelligent and surreal album fit?

Then came the death of Bin Laden, and the Bush-like pronouncements of a president who once swore to bring back America’s image of prestige abroad. Outside, privileged college kids who will most likely never know the horrors of war themselves thumped their chests and chanted a blood-lusty "USA! USA!" On that day, the tragicomic absurdity of Phillip Morris’s Lady Liberty Is Wasted really made sense

Alexander Billet is a music journalist and activist living in Chicago. He runs the website Rebel Frequencies and is a columnist for SOCIARTS. He has also appeared at TheNation.com and in Z Magazine, CounterPunch and PopMatters.com. He can be reached at rebelfrequencies@gmail.com.