Egypt: The Sound of Revolution

If revolutions can be described as festivals of the oppressed, then the ongoing uprising in Egypt may be a festival par excellence. Dictator Hosni Mubarak and his backers in the West would have us believe that the people of this country would be descended into chaos without his iron fist, but the facts on the ground don’t match up. 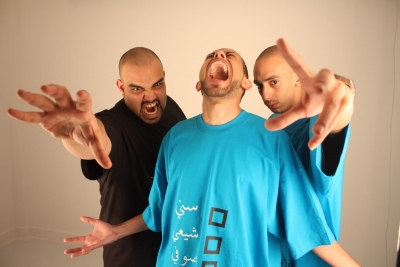 Reports from Cairo’s Tahrir Square and beyond seem to emulate other moments in history when masses of working people step forward onto history’s stage. Not only does every street corner host a debate over the future of the democratic movement, but ordinary folks take up the tasks of food distribution, medical care, self-defense. And in general, day-to-day culture takes on a whole new vitality.

Certainly, Egypt’s culture has plenty to work with. Media portrayals of Arabs-as-savages notwithstanding, this is the cradle of civilization. It’s given us musical instruments that would evolve into the piano and guitar. The influence of Egyptian poetry is one that any worthwhile scholar will acknowledge as crucial in the development of the art of the written word. It’s a legacy that continues to evolve today, and whose full potential may only be unfolding right now.

Muhsin Jassim al-Musawi, a professor of Arabic literature at Columbia University, claims that “outside the West poetry is still very powerful... It might not be very conspicuous, but it is there, an undercurrent, and whenever there is a need for it you will be surprised that people have something to say.” The tradition of Arab poetry isn’t only deep and rich, but has thrived under sometimes the most adverse conditions, its vividness far surpassing the pages of textbooks. And in fact, even in the middle of the protests, there are reported to have been countless instances of demonstrators spontaneously breaking into recitations of time-honored verse, allowing it to take on a whole new life and meaning.

Anyone who’s been to any large protest can recall seeing folk-singers and poets alike breaking into street-corner performances. Key among those in Egypt have been the songs of Ahmed Fouad Negm. If you want a better idea of who Ahmed Fouad Negm is, think of the Egyptian equivalent of Bob Dylan or Victor Jara. His lyrics, set to music of frequent collaborator Sheikh Imam, were the kind sung by workers and revolutionaries in the 1960s and landed their author in prison several times.

Now in his 80s, Negm remains virulently hostile toward Mubarak’s regime. In an interview with the New York Times in 2006, he said that “Egypt is ruled by a gang, led by Hosni Mubarak, and he is only there because America and Israel support him. He does not have the support of the street." No wonder his words resonate so now, in the midst of revolution.

Revolutions don’t just provide the space for folks to reclaim their own culture, but to create and shape it anew. So it comes as little surprise that Egypt’s hip-hop scene has become something of a global face of the uprising for the international music community. In a country where more than half are under the age of thirty, rap has grown some deep roots along the shores of the Nile over the past two decades.

Though certainly taking a cue from the giants that emerged from the ghettos of NYC and LA during those formative years, Egypt’s hip-hop has gestated all its own. Much like its counterpart from Palestine, Syria and all over the Middle East, it’s incorporated the region’s more traditional styles into its beat, creating a sound that is at once culturally proud and youthfully defiant.

Arabian Knightz are one of the groups that put it on the map. They’re the most famous in Egypt, and in a country where artists are not infrequently locked up, they’ve often been, in their own words “as political as we can get without going to jail.”

In the days after the Egyptian uprising bounced back from the vicious attacks of Mubarak’s thugs, a song by the Knightz shot its way round the web. Written and recorded during the first days of rage, “Rebel” is probably best described as a lyrical manifesto for the revolution. Though that justifiable pride in being Egyptian is unmistakable, it’s also obviously designed as a plea for solidarity. Not only are its lyrics in both Arabic and English, its chorus features an American voice long absent from the hip-hop world: Lauryn Hill.

On Tuesday, February 8th, “Prisoner” was performed for the first time by the Knightz at Tahrir Square. The timing of its message is significant, as it was the day after another wave of crackdowns, and when Mubarak’s mouthpieces predicted things would “start to get back to normal.” Not only were tens of thousands in Tahrir on that day, but the protests spread into strike waves that have started to take key industries.

And like the struggle itself, its message has gained a momentum well beyond most boundaries. Already there have been a flurry of statements and songs released from artists all over the world expressing strong solidarity with the Egyptian movement. A lot could be written about why it is that so many different kinds of music and art--both traditional and contemporary--have been unleashed by the possibility of revolution in our lifetime. Ultimately, the reason the two go hand-in-hand is straightforward: the need to create and the desire for freedom are what makes us profoundly human. Neither are possible without the other.

Alexander Billet is a music journalist and activist living in Chicago.  He runs the website Rebel Frequencies (http://rebelfrequencies.blogspot.com), and can be reached at rebelfrequencies@gmail.com.