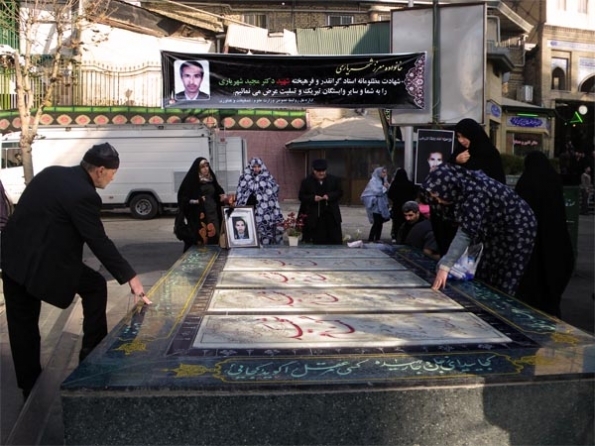 Professor Majid Shahriari, the Martyr of Science was buried outside of Imamzadeh Saleh in Tajrish.

Professor Majid Shahriari (ca. 1970 - November 29, 2010), was a quantum physicist who worked with the Iranian Atomic Energy Commission. He specialised in neutron transport, a phenomenon that lies at the heart of nuclear chain reactions in bombs and reactors. According to The Guardian he "had no known links to banned nuclear work". According to Al Jazeera he was a quantum physicist and was not a political figure at all" and he "was not involved in Iran's nuclear programme".

Some media reports said he taught at the Supreme National Defense University, which is run by the Iranian Army. Shahriari published dozens of esoteric conference reports and peer-reviewed articles on nuclear research. On November 29, 2010, unidentified assailants riding motorcycles launched separate bomb attacks, killing Shahriari and injuring nuclear scientist Fereydoon Abbasi, a professor at Shahid Beheshti University where Shahriari also taught. Dr. Abbasi's wife was also hurt. The killers had attached bombs to the professors' cars and detonated them from a distance.