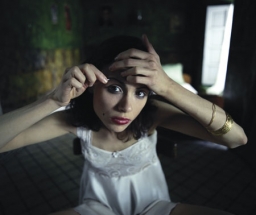 Women without MenWomen without Men (2009) had its US premier at the 2010 Sundance Film Festival’s Spotlight this year, with five sold out screenings followed by a Q & A with Shirin Neshat and Shoja Azari, directors of the movie. Neshat and Azari’s adaptation of Shahrnush Parsipur’s novella by the same title reveals challenging lives of four women of diverse backgrounds, during early 1950’s in Iran. Zinat, Faezeh, Fakhri and Munis struggle to find their voice as independent women in a society that is not quite ready to hear them.

Neshat’s prominent style of magic realism combined with strong elements of female melodrama unfolds a strong tale about societal turmoil and personal nightmares from five female perspectives. I consider Iran as the fifth character, which is highly misunderstood, mistreated, and even raped at the end by fundamentalist forces, very much like the lives of other four characters. Iran in this era stands on the verge of a profound transformation from a poor developing country to an independent wealthy nation with a democratic government. However, her loss of dignity to Western forces and deceitful politicians prepares its ancient grounds for totalitarianism to plant the seeds, only to bring religious fundamentalism to power thirty-nine years later. Since then, Iran has been going through its dreadful dark ages for half of a century, without a bright end at sight.

Women of this movie go on exile one by one, at Fakhri’s house, a wealthy alluring middle-aged woman, played by Arita Shahrzad, who has decided to divorce her husband, a monarchist sergeant. Her orchard in Karaj just outside of Tehran becomes a safe-haven for the three younger women, inviting them to leave everything behind, and start re-inventing themselves all over again. As charming as it sounds, the transition comes at a great cost, much like the lives of millions of Iranians displaced around Europe, North America and Australia. Neshat and Azari openly express their discontent about their state of living in exile, away from their homeland since the Islamic Revolution of 1979, and perhaps for the rest of their lives. They describe the orchard as an allegory for those of us who willingly or unwillingly find freedom by migrating to a foreign country, adopting the title of ‘expatriate’, sharing it with other people alike.

Women without Men is not a feminist movie, but it beautifully expresses what women without strong and caring men go through in a vastly masculine society. I wonder if the term ‘men’ is about actual ‘men’ or does it symbolize societal power, strength and security? Can I instead read: “Women without societal power, security, and strength”? How far can a woman go without these three elements in a traditionalist culture, where the governing law says a woman is worth half a man? Any modern man, woman or child knows this idea is simply rubbish and the premise of this movie tries not to put men down in order to bring women up. Actually, the male housekeeper of the orchard is a moderate man, apparently a man without a woman, who discretely looks after all four women. He is mainly active in the background, but his support is felt throughout the movie.

Shirin Neshat’s choice of composition, iconography, and grayish color for the movie tell a powerful visual story, moving the narrative forward with deep emotional engagement with each character where words need not to explain much. In fact, I could frankly ask for less dialogue, and more profound moments. Moments like when Munis slowly flies down the roof, where her sad smile in slow motion against the blue sky tells everything you need to know about her times gone by, perished dreams, and broken heart. Her misery is now released, her stories archived somewhere in a corner of history. Moments like this in cinema provoke sorrow or bliss. Images like this stay in one’s memory, and movies like this command social justice. With or without men, Iranian women are on the forefront of moving Iran towards a secular state with human rights for all. History has yet to see societies changing for better without having women as their greatest leaders, warriors and martyrs.