Press Release: Evolution Revolution: the Interconnectedness of All Beings
Submitted by evolutionrevolution on Mon, 01/24/2011 - 3:31pm 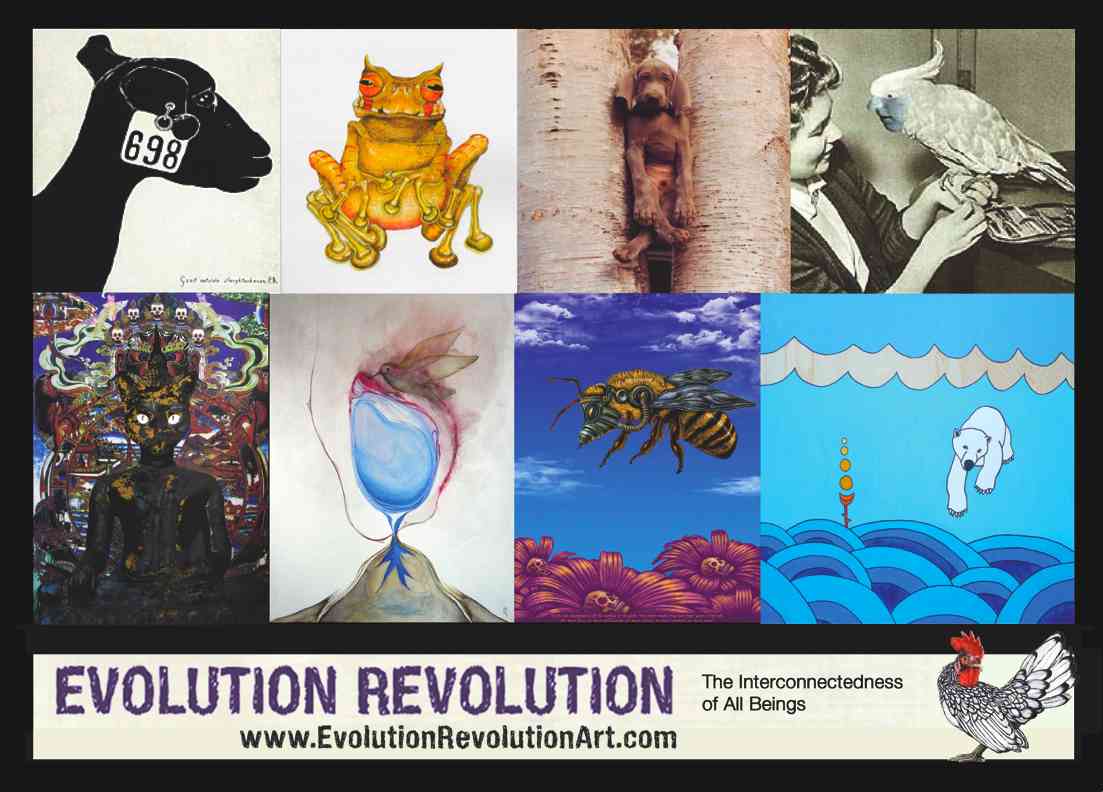 The mission of this art exhibition and forum is to open new dialogues and explore human perceptions about nature and the environment, awakening and inviting people to make more conscious decisions about their food, clothing, furniture, lifestyle and pets. Evolution Revolution includes the art works of some of the most prominent artists in the field of animal rights and welfare.

The show runs from February 19 through March 27, 2011 at Santa Monica Art Studios - Arena 1 Gallery and includes several public programs on the plight of animals. The topics are “Artist Panel: A conversation with some of the featured artists on arts and activism”, “Animal Liberation Forum: A thought provoking discussion with scholars, lawyers, filmmakers and activists on the plight of animals”, “Kafka’s Monkey - A Report To An Academy: A one man performance”, “The Annual Santa Monica Airport Art Walk”, and a closing reception which includes “Categorically Not: Political Animals with Robbie Conal and Amy Parish”. All of the events will take place at Santa Monica Art Studios - Arena 1 Gallery.

Admission is free and open to the public. Free parking is available.

William Wegman was born in Holyoke, Massachusetts, in 1943. He graduated from the Massachusetts College of Art, Boston, with a BFA in painting, then enrolled in the Masters painting and printmaking program at the University of Illinois, Champaign-Urbana, receiving an MFA in 1967. After teaching at various universities, Wegman’s interests in areas beyond painting ultimately led him to photography and the infant medium of video. While living in Long Beach, California, Wegman acquired Man Ray, the dog with whom he began a fruitful twelve-year collaboration. Man Ray became a central figure in Wegman’s photography and videos, known in the art world and beyond for his endearing deadpan presence. In 1972, Wegman and Man Ray moved to New York. His photographs, videos, paintings, and drawings have been exhibited in museums and galleries internationally. A retrospective of his work traveled to museums throughout Europe and the United States, including the Whitney Museum of American Art in New York. His most recent exhibitions have gone to Japan, Sweden, and the Orange County Museum of Art in California. Wegman lives in New York and Maine. www.WegmanWorld.com

Robbie Conal grew up on the upper west side of Manhattan--his parents were both union organizers who considered the major art museums to be day care centers for him. He attended the High School of Music and Art in New York, got his BFA at San Francisco State University and his Masters of Fine Arts degree at Stanford University. In 1984 he moved to Los Angeles. Inspired by the Reagan Administration, he began making satirical posters of politicians and bureaucrats who, by his reckoning, had abused their power in the name of representative democracy. He developed an irregular guerrilla army of volunteers and put his posters up in the streets of major cities around the country. He has made more than 50 posters satirizing politicians from both parties, televangelists and global capitalists. He also takes on issues of censorship, the Supreme Court’s ruling against women’s freedom of choice, and environmental issues.  www.robbieconal.com

Sue Coe is one of the most important politically oriented artists living in the U.S. today. From the outset of her career working as an illustrator for such publications as the New York Times and Time Magazine, Coe was committed to reaching a broad audience through the print media. Later, she began creating extended visual discourses on subjects (such as racial discrimination or animal rights) that she felt were not being adequately addressed by conventional news organizations. Widely written about and exhibited, Coe has appeared on the cover of Art News and been the subject of a retrospective exhibition at the Hirshhorn Museum and Sculpture Garden in Washington, D.C. Her work is in the collections of many major museums, including the Metropolitan Museum of Art and the Museum of Modern Art in New York. Sue Coe has been exclusively represented by the Galerie St. Etienne since1989.

Despite her much sought after work as an illustrator and later as a painter, Gee Vaucher is perhaps best known for the extensive body of work she created during the late seventies and early eighties. quite apart from her now famous collages, as designer with the renowned punk band ‘crass’, she concentrated her highly developed painting skills on ‘photorealism’, creating some of the most disturbing and acclaimed images of the time. Her work is generally accepted as having been seminal to the iconography of the ‘punk generation’. When ‘crass’ disbanded in 1984, Vaucher felt the need to explore other areas of work, abandoning the tightness of her more ‘overt’ political statements in favor of a more loosely expressed personal politics. Most of her work since then has in some way been connected with the human form, intimately exploring the psychological diversities of social inter-relationships. She has been exhibited extensively both solo and in group shows throughout the world.

Peter Kuper is a cartoonist and illustrator known for his social and political observations. He is the co-founder of the political anthology World War 3 Illustrated and has remained on its editorial board for 30 years. His illustrations and comics have appeared in Time, The New York Times and MAD where he has illustrated SPY vs. SPY every month since 1997. He has written and illustrated over twenty books including The System and Stop Forgetting To Remember. Peter has also adapted Upton Sinclair’s The Jungle and many of Franz Kafka’s works into comics including an award winning version of The Metamorphosis. His graphic novel, Sticks and Stones, won the Society of Illustrators gold medal Peter lived in Oaxaca, Mexico from July 2006-2008 and his work from that time can be seen in can be seen in his latest book Diario de Oaxaca. www.PeterKuper.com

Abandoned at birth, Emek has lived a difficult, often tragic life. After being forced to work for years as a child-laborer in a plutonium mine, he won a rare mining scholarship to attend art school. In art school, he fell in with a rough and dangerous crowd. Upon graduating most of them pursued lives of crime as freelance graphic artists, and were never heard from again. For Emek, the only hope of escaping the fate that befell his doomed peers -- advertising -- was to become a rock ‘n’ roll artist. Emek now lives in many worlds. Born a decade after the ‘60s, he was nevertheless influenced by ‘60s counter-culture'. Emek graduated with a Major in Art, and a Minor in Unemployment. His first poster commission was done immediately after the L.A. riots/uprising of 1992, for a unity rally and concert held on Martin Luther King Day. The poster was a success and from then on, Emek was hooked on the art form. In Emek’s posters, psychedelic ‘60s imagery collides with ‘90s post-industrial iconography. To this collision of the organic vs. the mechanical worlds he adds humor, social commentary and fantasy. Even in the smallest details there are messages. All of Emek’s artwork is originally hand-drawn and then hand- silkscreened for each actual concert or event, usually in limited editions of around 300. www.Emek.net

Cole Gerst is a graphic artist and painter, originally from the deep south of Albany, Georgia. He grew up surrounded by many outsider and folk artists, including his grandfather, a respected local craftsman.  Gerst has designed hundreds of CD covers and posters for bands like: The Shins, Elliott Smith, Foo Fighters and Yeah Yeah Yeahs. He is also an artist and his original paintings have shown in galleries world-wide. In addition, Vans shoes recently commissioned Cole to design custom shoes as part of their Vans artist series. Additionally, Gerst is an animator, writer and director. He recently finished two animated spots for Toyota/Scion. Gerst recently won the Sundancechannel.com ‘Greenimation’ competition with his ‘green’ themed animated short ‘Yung Yeti’. Cole also has two monthly comics in the LA Weekly, "La La Land" and "The Good Life City". He now heads up the firm, option-g, which is a multidisciplinary design firm which provides illustration, graphic design, art commissions and animation to the music and entertainment industry.  www.option-g.com

Karen Fiorito is a political street artist and curator residing in Los Angeles, California. Her art continues to be exhibited nationally and internationally and has appeared in such publications as Art in America, the Philadelphia Inquirer, Hustler Magazine, the LA Weekly, URB Magazine and the Seattle Weekly. She also owns and operates her own fine art printmaking studio and socially conscious publishing company, Buddha Cat Press, which produces prints for such subversive and visionary artists as Robbie Conal, Winston Smith and El Mac. Fiorito received her Master’s in Fine Art in Printmaking from Arizona State University and her B.F.A. in Printmaking from the University of the Arts in Philadelphia. In 2005, Fiorito received a Puffin Foundation Grant to install a billboard in Santa Monica, California, and in 2004, she was a recipient of a Change, Inc. grant. www.KarenFiorito.com

Yuri Shimojo has published several books in Japan, including: “Makkana Mangetsu~Crimson Full Moon”(1995), which showcase her earlier illustration works, “Vagabonds” (2001), a journal work from her trip in Central America and Mexico, and “Chiisana Rakugaki~Tiny Scribble” (1997), an autobiography of her unique childhood, which has republished in 2007. www.YuriShimojo.com

Jonathan Horowitz was born in New York in 1966 and studied at Wesleyan University, Middletown, Connecticut. His solo shows include Jonathan Horowitz/Silent Movie/MATRIX 151, Wadsworth Atheneum Museum of Art, Hartford, Connecticut, 2003, and Time, Life, People: Jonathan Horowitz at Kunsthalle St. Gallen, St. Gallen, Switzerland, 2001. Horowitz has been included in numerous key group exhibitions of recent years including Good News for People who Love Bad News, Studio 495, Swiss Institute, New York, 2007; Lines, Grids, Stains, Words, at the Museum of Modern Art, New York, 2007; and also in 2007, Art in America: 300 Years of Innovation, the National Art Museum of China, Beijing, touring to Shanghai Museum and the Museum of Contemporary Art Shanghai, organised by the Solomon R. Guggenheim Foundation and the Terra Foundation for American Art. Jonathan Horowitz: And/Or, the first solo exhibition of the New York-based artist at a New York museum, took place in 2009. He lives and works in New York.