Like an intricate silk carpet, this multimedia project weaves live music, dance and video art as it explores aspects of Persian culture. 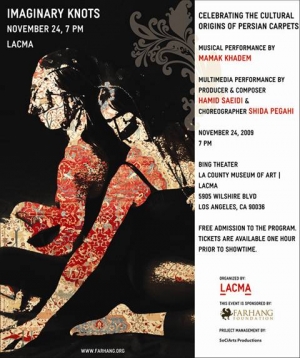 Three of Iran’s most creative and innovative artists present an evening celebrating their rich Persian heritage and the cultural roots they draw upon – a classical tradition as timeless and as beautiful as the Ardabil and Coronation Carpets in LACMA’s special installation Tale of Two Persian Carpets: The Ardabil and Coronation Carpets (November 14 – January 18, 2010).

Singer Mamak Khadem seeks to explore the intersections of Eastern and Western musical traditions. By collaborating with traditional performers from Iran as well as world-aware instrumentalists from the West, Mamak hopes to inspire people from around the world, particularly the young, to contemplate, observe, and celebrate the value of Persian heritage.

This event is sponsored by the Farhang Foundation

Special thanks to the following for their generous contributions to this event:
Mr Ephrahim; GUITY INTERNATIONAL
Mr. Helmi; DAMOKA

Imaginary Knots is an event as part of A Tale of Two Persian Carpets: The Ardabil and Coronation Carpets:

Dating to the first half of the 16thcentury, LACMA’s two spectacular Persian carpets, both the gift of J. Paul Getty, have only rarely been exhibited due in part to their size and their sensitivity to light. Now, for the first time, these large and sumptuous carpets will be shown together, affording visitors the opportunity to see two of the world’s most renowned Persian carpets and to learn something of their fascinating history before and after they left Iran.