By approaching Iran from aesthetic and social viewpoints, Exploring the Other takes the focus off Iran’s politicians and realigns it squarely on the country and its people. Athanasiadis’ photographs challenge the conventional media narrative told about Iran and challenges visitors to question how media information is presented (and filtered). 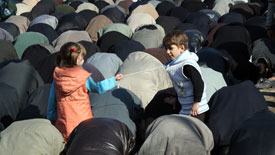 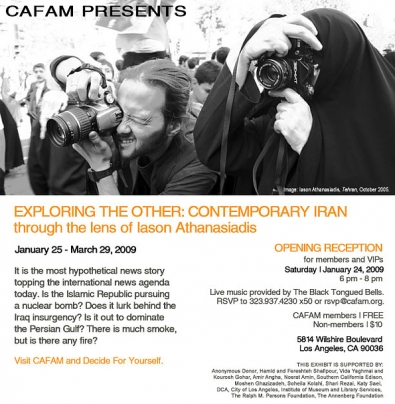 Opening reception is on January 24, 2009. Admission is free to the museum members, $10 for general public.

To learn about CAFAM go to www.cafam.org

Exploring the Other Press Release

How much do you really know about Iran? Do you think you have an accurate picture of the country? A shrinking world requires an expanded mind, are you ready to broaden your horizons? On January 25, 2009, CAFAM opens a timely exhibit on contemporary Iran. Exploring the Other offers an alternative narrative of the country famously included in the “Axis of Evil” by President George W. Bush. Through the vivid photography of international photojournalist Iason Athanasiadis, visitors will experience an Iran rarely seen in Western media. Vignettes of daily life not unlike our own are revealed in stunning color and black and white photography: Friends on a weekend ski-trip; a Tehran designer’s first fashion show; Soccer fans rooting for the home team; backstage at a rock concert. With the youth demographic rapidly growing—today, nearly 70% of Iran’s population is under 30—Iran's traditional culture is adapting and being reinterpreted by a youth subculture that is both Western and critical of the West.

Iason Athanasiadis, an Oxford graduate and Nieman Fellow at Harvard, has spent more time than almost any other Western journalist living and working in post-revolutionary Iran. Fluent in Persian and enrolled in Iran’s only graduate program open to foreign nationals, Athanasiadis enjoyed unparalleled access to document Iranian society—especially its thriving youth culture. This groundbreaking exhibit presents an alternate view of Iran, as well as explores issues of accuracy in news reporting and the future of international journalism.

By approaching Iran from aesthetic and social viewpoints, Exploring the Other takes the focus off Iran’s
politicians and realigns it squarely on the country and its people. Athanasiadis’ photographs challenge the conventional media narrative told about Iran and challenges visitors to question how media information is presented (and filtered).

Exploring the Other will be supported by a wealth of educational programming including lectures, book and poetry readings, film screenings, musical performances, and workshops—designed to provide visitors with a meaningful and more complete understanding of Iran.

Visit our community partner for Exploring the Other: SoCiArts Productions - www.sociarts.com

About Iason Athanasiadis
Writer, photographer and television producer, Iason Athanasiadis has been covering the Middle East, Central Asia, and the southeast Mediterranean since 1999. He earned degrees in Arabic and Modern Middle Eastern Studies at Oxford University (BA) as well as Persian and Contemporary Iranian Studies at Tehran's School of International Studies (MA).

Athanasiadis lived in Iran from 2004-2007, covering conflicts in Afghanistan, Iraq, Pakistan and Lebanon for the international media including the Times, the Christian Science Monitor, American Prospect, British Journalism Review and the South China Morning Post. He covered the 2003 invasion of Iraq from Qatar for al-Jazeera, the 2004 Athens Olympics for BBC World, and the 2006 Israeli-Hizbullah war in Lebanon as a freelancer. At the same time, his photography has been featured in solo exhibitions in Germany, Greece, Iran, and the United States, and his work published in Der Spiegel and the Los Angeles Times, among other newspapers and magazines. A native of Greece, Athanasiadis was a 2008 Nieman fellow at Harvard University. He is an Aristotle Onassis Foundation scholar and has lectured on Iran at Berkeley, Dartmouth, Harvard, MIT, Stanford, Yale and other universities www.iason.ws/.